A nation’s heritage, as embodied in historic sites and artefacts, is always at risk in times of war. In her poem ‘Hiding Ukraine’s Heritage’ Iris Anne Lewis explores the response of museum staff to the military conflict in Ukraine. The poem is published on the poetry website Wildfire Words, along with other Ukraine-themed poems. You can read and listen to Iris’s poem here.

This month’s poem, by Selwyn Morgan, is based on his memories of Al-Jahra in Kuwait in the Seventies. In 1991, during the Kuwait War, Al-Jahra Ridge and Highway 80 became famous for their scenes of destruction.

Selwyn said, ‘I lived in Kuwait City. At weekends, Friday and Saturdays in the Middle East, I would often visit the desert that surrounds the Arabian Gulf. Al-Jahra, west of the city, was one of my favourite places. It sat on Highway 80, leading to the Iraq border. The flat desert plain met a 20m tall ridge, impressive in the otherwise monotonous landscape.

‘Over the millennia, the edge of the ridge was forged into canyons by flash floods caused by the occasional torrential rain. Twice a year, I stood in those canyons so as to be unseen by Steppe Eagles that migrated, north in spring, and south in autumn. I would observe a continuous stream of birds approach the ridge and use the thermals created from it to soar upwards until almost lost to sight. They had gained height so as to glide effortlessly onwards on their chosen path.’    You can read Selwyn’s poem here.

Frank said: ‘This poem is quite autobiographical, a memory of a visit some years ago to find the farm where my mother was born and raised, in Southern Ireland.

‘I remembered going there when I was twelve or so and it resonated the first time I read Fern Hill by Dylan Thomas. I submitted the poem and the same day it was accepted for publication.’ You can read Frank’s poem here

This month’s poem ‘It was as if’ by Frank McMahon was written several months into the first lockdown, during the wonderful Spring weather.

Frank said: ‘Images and memories of hill-forts, (some in the Cotswolds) came to mind and informed the first few stanzas, alongside the growing feeling of uncertainty when encountering people we did not know.

‘The absence of ‘plane and traffic noise took me back to childhood and the sense of an uncluttered natural world, enhanced now by greater knowledge of its complexity and amplified by people discovering it and its benefits for the first time.

‘In a way, the poem was a consoling counterpoint to the fear and hardships being experienced by many at that time.’

The poem features in the anthology, Can you hear the People sing? published by Palewell Press. Palewell is also the publisher behind Frank’s first volume of poems, At the Storm’s Edge. They will be publishing his second volume, A Different Land, in June.

To read ‘It was as if’ click here, or on the Poem of the Month logo on our website.

Deer at Hannington Bridge and The Dragon in my Attic, both inspired by true events, are published in the themed January feature ‘Backwards and Forwards’. You can read Iris’s poems here

The first Dialect Anthology, featuring poetry by two Somewhere Else writers, has just been published. Based in Stroud, Dialect is an inclusive literary development platform for rural writers. The anthology showcases the work produced as a result of Dialect’s many activities. Amongst these was a writing workshop based in Stroud’s Museum in the Park, attended by Iris Anne Lewis and Frank McMahon. Using the objects in the museum as inspiration Frank wrote The Christmas Menu, while Iris wrote Piano. Both poems are included in the anthology alongside poetry by renowned writers Fiona Benson and Pascal Petit. A digital copy of the anthology is available for £5 here.

This month’s short story by Dave Walklett is based on a real experience.

In the early 1980s, Dave and his fiancée travelled to Germany to spend Christmas with his parents — his father was in the RAF. They were due to travel by coach but, somehow, they lost the information about where to board the coach in London.

‘On the morning of our departure, my fiancée was very ill. I, however, was determined to go and so we embarked on a trans-European adventure. We caught the train to Dover, the Hovercraft across to Ostend, and then the train to our destination.

‘When we arrived at the Air Force Base, I had no idea where my parents actually lived; I had never been before, and they had only recently moved.

Dave, who is currently studying for an MA in Creative Writing with the Open University, has chosen to write the story as a thriller. You can read his story here.

Frank McMahon’s poem ‘Love is love is love is love’ has been published in the latest edition of Makarelle.com the independent on line literary magazine. Each quarterly issue has its own theme.To find out more click here 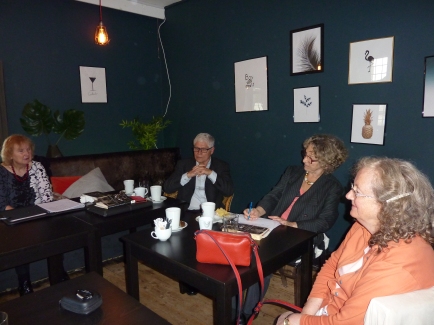 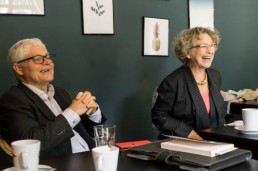