Sophie worked as a journalist for 15 years until she finally admitted to writing
fiction. Her work has appeared in local and national magazines.

In 2011 she read at the Cheltenham Literature Festival after winning the
Gloucestershire Writers’ Network short story award and in 2015 was invited
to judge the short story element of that competition. She was long-listed for the InkTears flash fiction competition in 2017 and the Fish Short Story Prize in 2020. She was also long-listed for the Mslexia/Poetry Book Society Women’s Poetry Prize in 2019.

She is in the process of writing her second novel, even though she can’t find
anyone who likes the first one very much, but is too addicted to writing to stop and do something more sensible instead.

We took tea
quietly,
With Hannah Stinchcomb
who died
aged 64,
And William John
who died
aged eight.
The red tablecloth blew lightly in the wind.

We had walked all summer
passing Painswick,
climbing to the monuments.
treading hollow and high places
Tired now.
‘Can I persuade you?’ the woman
by the tea urn said.

We unclipped rucksacks
Took our seats
Gazed across the
Valley to the
Gleaming Severn
And the sky was
And the sun does
And the land is.
So we rested
between thought
for a while.

She disappoints her mother who dreams of prom dresses nipped in tight at the waist and tied with ribbons like a birthday surprise. Natalie wears pink, purchased from the outsize store, teams it with a purple sequined top and hopes she looks festive. She drinks flirts a little like an elephant on ice. Notices the sniggers.

Nothing makes sense to Natalie as she fumbles her way through Wuthering Heights and long-multiplication, photosynthesis and equations. Nothing balances. She dreams of vague lovers, chicken drumsticks dipped in barbecue sauce and saving the planet, fails to grasp the dates of the Second World War and imagines men on horseback charging Hitler’s tanks while Florence Nightingale weeps.

She avoids her sister, sharp as a splinter, who hisses ‘Blubber butt,’ ‘Thunder thighs,’ ‘Meatball,’ ‘Loser.’ The sister pinches and pecks at Natalie, elbows glasses of water on her food, aims sly kicks under the table. Natalie’s thoughts wail and flap like seal cubs.

She learns to go unnoticed, stoops her shoulders, lowers her eyes, tries to hide in fathomless dresses. She expects nothing. She pictures herself a stone, a tree, a mountain in someone else’s landscape. She gets a job in a grocery store, a supermarket, a café.  Arms sunk in soap suds she stays in the kitchen, lets other girls dance in and out of the swinging doors and waits for something to happen.

‘Oh fuck it!’ says Lisa, dribbling dark coffee stains down her chin down her apron. Lisa, shutter quick, so fast she misses her mouth and giggles ‘Give us a sponge.’ Natalie passes, scrubs a little at the ruined apron while Lisa wipes her chin.

They plunge into friendship. Lisa changed the talk to the places she had visited and the men she had slept with. In Sheerness she had gone with a man who had been struck by lightning. In Whitby, she had met a fisherman with one webbed foot. Lisa leaned against the sink and described wet, reckless nights in Scarborough, sulfurous guest houses, red wine, and prawns, finger-stinging hot, plucked from the barbecue. Natalie listened, let the suds grow cold, oozed fat, amorphous tears when the manageress scolded.

‘Poor cow,’ thought Lisa, noticing the tears. Lisa knew how to smile at customers. She could balance three plates on her delicate wrists and swing her hips to the dance of the door, forgot to give change with such charm it was a pleasure to lose it.

They say that if you measure a body just before and just after death it always loses 21 grams. Perhaps 21 grams is the weight of a soul and they are all the same weight? Perhaps it is not the soul? Perhaps it is air? Perhaps water? But perhaps it is whatever makes us ourselves and not James Kent who swallowed a snail in a salad and swore it was still there crawling up and down his throat two years later? Or Arthur Pedrick who patented 162 inventions, not one of them successful? Or any of the other billions of people who are not ourselves?

But perhaps, if you are very ill, and they bring out the scales, you should worry. Twenty-one grams is very little: a spoonful of sugar, an egg cup of salt, between life and death, between this person and the next.

Lisa’s flat is in Swindon, the ugliest town in England. Red raw endless streets of fag-end houses and the perpetual wind howling through concrete alleys stacked like cardboard, life by billboard and roundabout. It is the upstairs half of a bow-fronted house thrown up in the 30s, reached on a ripple, a swell, a high and low tide of sleeping policemen.

The music: Billie Holiday and Chopin, Plan B and Edith Piaf, Beethoven and Benny Hill.

The friends: insurance brokers and street girls, TV reporters and joy rides, actuaries, an embalmer, a claims manager, dog psychiatrist, a kosher certification consultant and a field agent for MI5.

Natalie tries on five dresses, opts for green, carefully winds her hair round hedgehog curlers, singes it a little. She stands in the doorway clutching a bottle of Merlot and three tubes of Pringles. Considers leaving before she is noticed.

Lisa grabs her hand and hauls her into the room. ‘This is Natalie who works with me,’ she cries.’ Try this, and this and this and this,’ while piling Natalie’s plate with food. ’Tell Natalie all about your dogs, your bodies, your secrets,’ she calls and Natalie finds herself inside the hot mumble jumble of people, nodding and smiling, arguing and dancing, loving and hating at Lisa’s party.

‘Of course, nothing is as it seems,’ said a man later, when the guitars were out and couple tangled on the cushions.

‘Why not?’ asked Natalie, cushioned in a corner, trying to keep her feet away from the couple in front of her.

‘Everyone has too much to hide. No one can afford to be honest, not even at a party.’

‘Least of all at a party,’ says Lisa and drags him off for a dance.

Natalie thinks about it. Decides she is as she seems. Wishes she wasn’t.

There are some parties that are more than their component parts. Some parties that brew. The music from Lisa’ party dances out of the windows and down the road to where a woman, alone in her room, recognizes the song and puts down the pills. Five streets away a man hears the music faintly in his sleep and smiles as it pulls him sweetly out of life.

Heels tumbling out of the doorway onto wet pavements. The early morning sky a clean slate. Life feels larger, lighter, loftier to Natalie as guests scatter among the gleaming streets, full of promise and who cares if it does not survive the dawn. 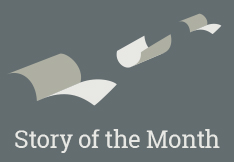 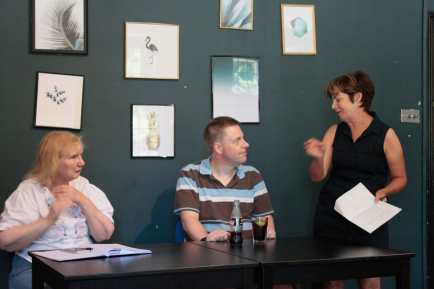