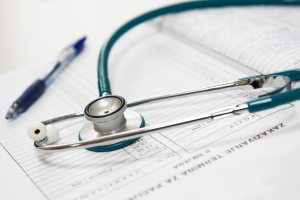 Woe made his way beside the dry river bed in the small northern town of Dock. The sun was beginning to rise but by midday the town would be deserted. Two centuries earlier, the earth’s orbit around the sun had begun to decay. Water became so scarce that anyone caught wasting a single drop was considered a criminal. Climate change was serious. A ninety year old woman was thrown into jail for growing a rambling rose. Gradually, with each generation, human happiness withered away.

Woe arrived at the Hospital for the Chronically Happy and Other Non-Serious Illnesses. Outside, the sun was growing hot but underground, where he sat waiting, it was as cool and as damp as a North Sea lobster pot.

‘It won’t be easy. Humans have an innate desire to be sad. There are many traits you will need to lose. Take kindness, the root cause of all happiness, are you willing to lose that?’

Woe recalled his father’s words. Cry and the world cries with you, laugh and you laugh alone. Woe had no friends. Being happy made him difficult to be around. What’s the use of kindness, he thought, if there’s no-one to receive it?

‘A word of warning,’ Dr Graves said, ‘some inmates are hopeless cases. Don’t let them impede your progress.’

A nurse led Woe further into the bowels of the earth to his cell of steel and rock. On the bedside table lay the hospital bible, The Noble Art of Sadness and Other Grave Traits. She ordered him to read it every day then left.

Taking a small photograph from his trouser pocket, Woe placed it on the bedside table. His parents frowned at the camera. They had been devastated to discover that their baby boy was a bundle of joy but loved him despite his happiness. Woe looked into their eyes and promised he would make them proud.

Woe made his way to the community room. A warden stood by the door. Inside, three men sat at a table laughing and a young girl giggled alone. Woe noticed a giant of a man sitting alone, his eyes closed, grinning from ear to ear.

As he poured a cup of coffee from an urn, the young girl moved to his side. ‘Do you want to hear a joke?’

Woe stifled a smile. ‘Please leave me alone. I’m not here for the fun of it.’

‘There was an Irish man, an English man and a goat…’ she continued.

Woe looked around for the warden but he was nowhere to be seen.

Suddenly, the three men surrounded him. ‘She said do you want to hear a joke.’

Woe could tell they were serious. Despite the doctor’s warning he began to laugh.

‘I’m Grebus,’ the giant said, offering Woe a humungous hand. ‘You look like you need help.’

‘What’s wrong with you?’

‘Do you want to know a secret? I’m not really happy. I’m just here for a laugh.’

‘No, I’m curious. Everyone’s miserable. I want to be different. Could you teach me to be happy?’

A killjoy of wardens rushed in and all inmates ordered back to their rooms. Someone had incited a party.

Back in his room Woe broke down and laughed himself silly. When he recovered he picked up The Art of Sadness. Reasons to be miserable — one, two, three. As Woe finished the third chapter his brain yawed to the left leaving him with a vague and unfamiliar feeling. He lay down, exhausted, and laughed himself to sleep.

Over the next few days, Woe and Grebus became friends. Woe was over the moon. He had never had a friend before. After much persuasion, he agreed to teach Grebus the art of happiness and, in return, Grebus promised to share the secret of sadness.

‘You look like an idiot,’ Woe said laughing, ‘You have to smile with your eyes.’

‘You don’t do it, you feel it. Happiness comes from the heart.’

‘Who said, the intention that man should be happy is not included in the plan of creation?

‘Well, whoever it was he was right. Look at me, I’m an abomination.’

‘Please help me to be happy, Woe.’

You weren’t born to be happy. I’m not sure your heart can take it.’

Grebus tried to laugh but his eyes betrayed his sadness. Woe’s heart shifted and for the first time he felt its weight.

The next day they joined a group of inmates for a day out. As they walked along on the shady side of the street, a short man came out of a shop carrying a pile of boxes. When he walked into the lamppost the inmates of the Hospital for the Chronically Happy cracked but Grebus cracked the deepest. He held his sides, wiped tears from his eyes and begged mercy from a disapproving God.

Later that day, Woe overheard that Grebus had become hysterical and, for his own safety, been placed in solitary confinement.

By the next evening Grebus was still nowhere to be seen. Woe went to see Dr Graves.

Woe’s heart missed a beat for the first time in twenty one years.

‘Sadly, last night Grebus fell into a deep state of happiness and died in his sleep.’

Woe sat still. A single tear rolled down his cheek, then another and another. They weren’t his usual tears of laughter, which were cool and flowed freely, they were hot and tore at his eyes. Woe thought he might be going mad and usually that would have made him laugh, but instead he sobbed with genuine sadness, and he had never felt so happy in his life.