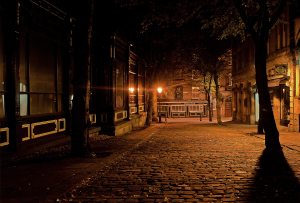 The Scent of Darkness – by Graham Bruce Fletcher

Sally saw solstices as hinges in the concertina of the sixty-six years that had made up her life so far. The summers; the peaks of pleated bellows, and winters – the furrows. Equinoxes never seemed important. They were simply reminders of whether life was heading towards heat and light, or into chill darkness; to growth or decay.

Such considerations matter less in the cities. Too few trees. Even in the parks nobody ever looks up. Eyes focus myopically on the opportunities and threats presented by the strengths and weaknesses of other human beings. Scanning for body language, facial expressions. Close examination of the nearby world. Sally has presbyopia. It comes with age. She looks further.

The midsummer festival out here in the country being over, Sally set off to walk through the little market town to her home in the valley a couple of miles beyond. The dry June heat told tales on the town dwellers, slowly baking the contents of wheelie-bins, betraying the secrets of wasted food and chemical combatants intended to conceal even the most natural of odours that people exude wherever they live.

Some scents become more evident at night. This is not an effect of perception, Not other senses compensating for the inability to see very much in the dark, but genuinely because some scents only arise at night. A few linger into the day, such as the reek of fox musk, but others wait for the darkness to begin their seductive work, and are gone again by morning.

Sally knew the town’s landscape well. She could navigate without the need for streetlights. Would distinguish the corner where wisteria hung from the stonework above her, from the low wall – where jasmine and honeysuckle counted out the hours from dusk to dawn. Soon the night phlox would tell her that July was marking the return towards darker nights.

But tonight a new and unfamiliar scent made her pause and follow her nose to discover its source. At one thirty in the morning Sally felt sure nobody would see her as she stepped through the gate and into the greenhouse. She also felt sure that she’d have smelled the scent even if the door had not been open, it was so sweet and heavy.

She had to see it. The light of her mobile phone wasn’t right. At the bottom of her shoulder bag she kept a small torch. Cupping her hand around the lens, she carefully played enough light onto the shrub to reveal pale orange-yellow, almost fleshy, hanging bells, resembling witches’ hats, with whimsical curlicues sprouting around their brims. Moving closer, she spotted the label beneath, slipped into the side of the large terracotta pot at the margin of the rich damp compost.

She giggled at the name: “Brugmansia Dr Seuss”, remembering embarrassingly contrived rhymes in the books her friends at primary school had showed her. She had never liked those books; the chanting rhythms and rhymes seemed so much like the spells and incantations of some kind of bogus religion. When she got home, she resolved, she would look up Brugmansia in her RHS Encyclopaedia of Plants.

Stepping back through the gate, Sally suddenly realised she was unsure which way to turn. The street had lost every characteristic familiar to her. A vennel to her left bore a sign, unhelpfully stating, “Meerkat Place”. That she’d never noticed this opening between houses she’d known all her life merely aroused her curiosity.

Sally wasn’t inclined to superstition. Her attendance at the midsummer festival wasn’t romantically inspired by imagined tales of fairy folk and magic, and – so far as she was concerned – the solstice had no significance beyond the rational scientific meaning of the predictable movement of the planet and the effect of the Sun on the seasons. She’d shared concerns about the ecological impact of humanity upon the world, but otherwise viewed most others at the festival as a bunch of idiotic hippies.

Peering down the vennel, she wasn’t the least bit startled by a small man who pushed past her from behind and said; “Goodnight! Buy!”

Ahead of her the man turned and beckoned; “Well, come along then – this way to the place.”

“Oh, no. Sorry, I’m on my way home.” She looked back towards the street. She was surprised to find she’d already come quite far down the alleyway.

“We have everything you want.” he said. He held his hand out for hers, confident she would comply.

Sally was surprised to find she accepted his hand. It was large, warm, dry and strangely authorative.

“Are you one of the little people?”

“No, I’m self-employed. Lidl could never offer you what you want as precisely as I shall.”

“Thank you, but I don’t want anything. I just want to go home.”

“Here we are.” The man made a broad gesture with his free hand, and Sally found herself looking at a market stall, emblazoned with a banner proclaiming “Emporium Abe Cidofu: All Sally Wants”

Now Sally began to feel a little disconcerted. Then she saw the gollie she’d been given as a child. The one she had given to a charity shop before she had left home to go to university.

She picked it up. She had no doubt. This was her gollie. “How?” she asked.

“If you no longer want it, there’s much more which I’m sure you do.”

Sally looked again at the stall. It was stacked high with objects she recognised. Everything she’d ever owned. The contents of her home laid out before her. Not merely identical goods, but her possessions themselves.

“You’ve stolen all this! You’re a burglar!” her finger stabbed towards the stall holder in furious accusation.

“That‘s so ungracious. Such a pity to miss this shopping opportunity.” Mr Cidofu shook his head. “Take these, for example.” He held out a set of technical drawing instruments.

“But I lost those at University nearly fifty years ago…” Sally began to shake. She wondered if perhaps she was beginning to develop dementia.

“Don’t you want them any longer?” Abe Cidofu wheedled.

“Just leave me be!” Sally shouted.

When she turned her key in the latch, the sky was beginning to brighten in the east. Switching on the lights she was unsure whether or not she was glad that everything was as she’d left it.

And she wondered what it would have cost her to bring back her lost gollie and her drawing set from the darkness.

The Scent of Darkness was the winner of Graffiti Magazine’s short story competition in summer 2018 ( issue 23). To obtain a copy of the magazine or to subscribe, email: writersinthebrewery@yahoo.co.uk.